Now in its third year, Charles Russell Speechlys announced the winner of their student competition at which finalists from City and Islington College displayed their artwork.

Based on the theme “energy” the winner, Jokubas Vaicekauskas, impressed the Judges with two pieces of artwork which tied in first place.

“Jokubas deserves the recognition of Langlands & Bell in awarding him the 1st prize in our third annual student art competition having selected one of his two pieces from an exceptional group of entries.

We are delighted to bring the energy and creativity of all the finalists to our international clients and employees by showing their works for a year in our London headquarters. We strongly believe in sharing our connections and space to encourage and promote young artistic talent within our local community.

It was wonderful to meet the artists and to learn about their pieces. We look forward to following their individual journeys and bringing further support and encouragement to them. “ 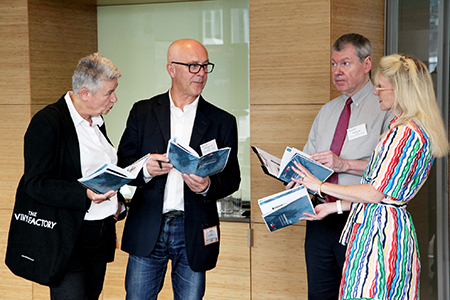 Guest judges on the evening were acclaimed artists Langlands & Bell who began collaborating in 1978 and have exhibited widely internationally since the early 1980s including exhibitions at Tate Britain and Tate Modern in London, MoMA New York, Venice Biennale, Seoul Biennale, Hermitage St Petersburg, and CCA Kitakyushu Japan. Their work ranges from sculpture, installation, film & video and interactive digital media to full scale architecture. In 2002 Langlands & Bell were commissioned as “Official War Artists” by the Imperial War Museum, London, to research “The Aftermath of September 11 and the War in Afghanistan”.  They won the BAFTA Award for Interactive Arts Installation and were nominated for the Turner Prize for "The House of Osama bin Laden" after their return to London.

In 2016 they completed the permanent installation "Beauty < Immortality" at Piccadilly Circus Underground station. They will present solo exhibitions of new work at Gallery 1957, Accra Ghana, from 17 October - 3 December 2019, and at Sir John Soane’s Museum, London, from 26 February - 25 May 2020.

We are committed to running our business responsibly – learn about our diversity & inclusion, social impact and environment commitments.

Find out more about how we support the communities in which we work.

There is now a larger expectation that collectors will make sure they are legally and ethically acquiring art.

The deal means that art firms can put in place procedures for buying and selling.

Once the UK law comes into effect it will prevent the export of most ivory from the UK regardless of what form the new EU regulation takes.

Rudy Capildeo explains the process taken to reclaim the art works that had been left by Irma Lowenstein Austin.

Posthumous releases from the "Starman's" Estate

Brexit Deal: Impact on the UK Art and Luxury Market

After four years of negotiations, on 30 December 2020 Parliament approved the long-awaited Trade and Cooperation Agreement.

We understand that these are extremely difficult times and we are here to offer as much support as possible to our clients.

Tim Maxwell quoted in The Times, Artnet and Antiques Trade Gazette on the Court of Appeal's ruling in the Ivory Act appeal

Victory for Veuve Clicquot in dispute over its distinctive orange labels

Corks were surely popping at the HQ of MHCS after the Court's decision that Veuve Clicquot's labels had been infringed.

The US Court upheld judgement against a developer confirming that his destruction of graffiti murals violated the Visual Artists Rights Act.

When TEFAF 2020 kicks off today, UK and EU sellers of artworks will need to be particularly mindful.