Following polling at the start of the session, what was striking was that 90% were either optimistic or very optimistic in the prospects for growth of the market. There are good fundamental reasons for such optimism; not least housing demand, the huge growth of the sector in the United States, and the demand for long term steady income streams from institutional investors. There is clearly a gap in the market for such a product and it meets the objectives of a number of different stakeholders including the end user. 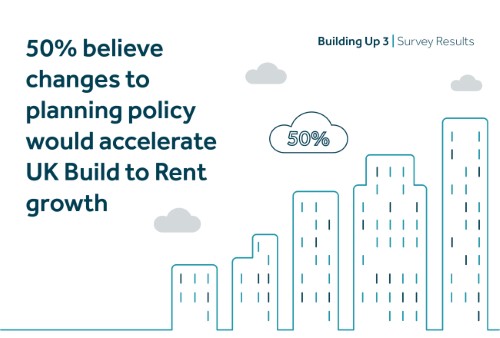 The discussion highlighted some key take away messages every investor should note.

Firstly, the lack of data on key metrics to assist investors successfully invest and manage schemes and the lack of operational experience. This is perhaps unsurprising given the lack of stabilised assets to date although this will change as we move through the decade and more schemes come on line and operators gain the necessary experience and competition increases amongst operators. The experience from the multi-family sector in the States strongly points to data and operational experience being vital to the long term flourishing of the sector.

The BTR sector in the UK is now entering the operational phase given that the first generation of schemes have now been delivered into the market. In many ways, the hard part now begins. This is because BTR is more operationally intensive compared to other property investment sub-sectors and is often compared to hospitality in terms of the focus on customer service and the around-the-clock nature of the business. However, what makes BTR even more challenging is that we are dealing with where people live; their homes. When something goes wrong at a hotel, the guest can check out and never come back. When something goes wrong on a BTR property, the resident is typically in a long term lease and this is their home, so it can be very personal and sometimes emotional. This fact, in addition to the sheer number of people to serve, makes BTR especially challenging. If you look at a typical 300 unit BTR property, there will likely be about 500 residents living on site. In addition, the annual turnover (‘churn’) at the property could be about one-third each year. That means 100 units moving out, and another 100 units moving in, every year. When you start to visualize all of this activity, you can see how BTR is really an operations and a people-driven business, with real estate sitting behind all of this.

Secondly, investment strategies for BTR are changing. In the early days most investors were only interested in investments in London, and perhaps a few of the larger regional cities. As BTR is becoming more established and accepted as an asset class, investors are starting to look to secondary and even tertiary towns, especially if they have good transport links to nearby cities. And just as the geography for BTR is expanding, so is the type of development – from a focus on urban high rises to mid-rise and low-rise (‘garden-style’ in U.S. parlance) and now even single family houses designed as rentals. If you take in the many potential forms of BTR now being moved forward, and layer in other hybrid products, like co-living (somewhere between student housing and traditional BTR), it really comes into focus how quickly evolving and dynamic the BTR market has become.

Thirdly, the fast moving nature of “prop tech” is a huge opportunity area for investors to leverage prop tech to enhance operational efficiency and the end user experience. Residential housing has historically been the much slower-moving cousin of the property sectors. However, the growth in rental housing both in the UK and globally, has resulted in many new and innovative tech solutions. Resi is a bit of a “perfect storm” for new prop tech offerings as the demographic is mostly those in their 20s and 30s who tend to embrace new technology.

Lastly, the emergence of companies playing in the short let space are finding plenty of opportunity out there in the market. Several companies have been formed to take up blocks of vacant space and fill them with short term lets allowing landlords to push their overall occupancy rates closer towards 100%. Under normal operations, BTR will always have a few percentage points of “frictional vacancy” at any point in time. But by allowing third-party providers to fill in these gaps in occupancy with shorter term lets, this is “found revenue” for BTR investors and further drives increased yields. This same approach can be a huge benefit on properties going through their initial lease-up period.  Since larger BTR properties can take 12 or even 18 months to lease up to stabilized occupancy, by definition there are large blocks of apartments that sit unoccupied for many months during this period. Enter the short let providers who again can help fill up these void periods.

When considering the blending of BTR offerings like co-living and the blending of BTR terms – long term leases, short term lets, and everything in between - what becomes clear is that the BTR sector is incredibly dynamic and is adjusting quickly to the needs of the market. The only thing that can be assured, is that there will be BTR options and offerings in the near future that the market has never seen before! Those investors which embrace the change, and adapt accordingly, will be well placed to flourish in this dynamic and exciting market.

This article was written by Real Estate Partner and Head of Build to Rent, David Paxton at Charles Russell Speechlys and CEO, David Woodward at Global Apartment Advisors. For more information please contact David Paxton on +44 (0)20 7438 2227 or david.paxton@crsblaw.com.

Join us for the second session in our Charity Training series where we will cover training for Charity Trustees and Senior Executives.

Join us for the first session in our Charity Training series where we will discuss ESG for Charities.

VV v VV - Just 5 months of marriage and the most expensive train ticket ever?

Content+Cloud continues its growth journey, this is our 7th successful transaction for them.

What HNWs should know about UK cryptocurrency tax

Being Green - The Struggle for Power

Everything you need to know about Green Leases

Is the UK open for business? A discussion with the Home Office

We hosted an immigration webinar with the policymakers from the Home Office.

What UK investors can gain from an overseas life sciences partner

Levelling up or a barrier to house building?

Charles Russell Speechlys advises Acora on its acquisition of Secrutiny

Charles Russell Speechlys advises Acora on its acquisition of Secrutiny

Everything you need to know about the Building Safety Act 2022