Birss considered that Thomas Pink's trade marks were infringed, despite the fact that the two brands operate in very different sectors within the fashion industry.

This is perhaps a reflection of the fact that fashion brands often diversify their goods into other sectors – Birss acknowledged that perfume and other beauty and personal care products are similar to clothing and accessories.

The decision is therefore likely to be welcomed by fashion brands.

Lastly, the case is a relatively rare example of an infringement case in which the judge found that the infringer's use might have a detrimental effect on the repute of the registered trade marks.

The judge said that "[Thomas Pink's] trade mark will be associated with a mass market offering, reducing its luxurious reputation".

Thomas Pink has been around since 1984, primarily selling men's shirts (but over time selling other goods such as ties and accessories for men and women). Thomas Pink owned both a Community and UK registered trade mark, details of which are below. 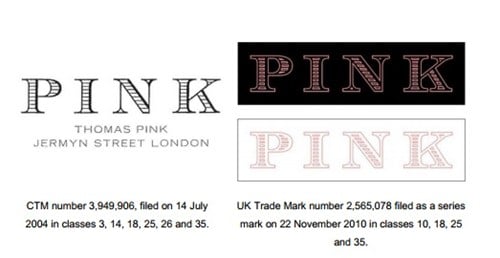 In 2004, Victoria's Secret launched a sub-brand in the UK called PINK, which now has its own PINK branded stores. In 2012, Victoria's Secret opened stores in the UK, selling casual clothing by reference to the PINK name, examples of which are below.

Thomas Pink sued for infringement and the key aspects of the decision are set out below.

Article 51(1)(a) CTMR states that the rights of the proprietor of a Community trade mark shall be revoked if within a continuous period of 5 years the trade mark has not been put into genuine use in the Community in relation to the goods or services in respect of which it is registered and there are no proper reasons for non-use.

In that context, if a trade mark proprietor has made genuine use of their trade mark in relation to some of the goods or services covered by the specification, the registration may be revoked in relation to the remainder of them.

Victoria's Secret alleged that Thomas Pink was not able to show genuine use of their CTM in relation to numerous goods in classes 3, 14, 18, 35 and 25. The court disagreed in relation to almost all goods which were challenged and only a very small number of goods have been removed from the specification.

The judge was satisfied that the range of goods in relation to which the claimant had shown genuine use (including a variety of goods for both the upper and lower body) justified a registration in class 25 with the description "clothing".

Whilst Victoria's Secret was successful in arguing that the UK registered trade mark was devoid of distinctive character (on the basis of Section 3(1)(b) and/or 3(1)(c) of the Trade Marks Act), it was open to Thomas Pink to demonstrate that the mark had acquired distinctiveness through use (under the proviso to Section 3(1)).

The fact that Thomas Pink had used the mark in forms which were slightly different from the form of the mark shown on the register did not mean that they would not be able to rely on that use for the purposes of demonstrating acquired distinctiveness.

The slight alterations in the form used by Thomas Pink did not alter the distinctive character of the mark. The judge rightly observed that "proprietors do not always and consistently use a mark in precisely the form as registered".

This was on the basis of Article 9(1)(b) CTMR/s.10(2) TMA, which state that a sign will infringe where it is similar to the registered trade mark and goods/services are identical or similar and there is a likelihood of confusion.

Nevertheless, the judge found that the use of the mark PINK alone by Victoria's Secret was infringing. The marks were similar, the goods were identical or similar and nothing in the context reduced the likelihood of confusion.

The judge found that use of the mark PINK on swing tags on garments sold inside Victoria's Secret's premises did not infringe under Article 9(1)(b) as there was sufficient emphasis on the brand Victoria's Secret to counteract any confusion.

But, the Judge then went on to find that this use did infringe under Article 9(1)(c) CTMR/s.10(3) TMA, which can only be used in relation to trade marks which have a "reputation" in the relevant territory.

Having established this, the mark will be infringed if a similar sign is used without due cause and that use takes unfair advantage of, or is detrimental to, the distinctive character or the repute of the trade mark.

In this case, all the necessary ingredients were present:

Birss J did not struggle to find that Thomas Pink's trade marks benefited from this extended protection by virtue of their "major reputation".

In addition, Victoria's Secret's use would also "inevitably cause a detriment to the distinctive character of the claimant's mark".

It was not targeted at the UK/EU and even if it was, the mark PINK was not shown independently of the mark Victoria's Secret. 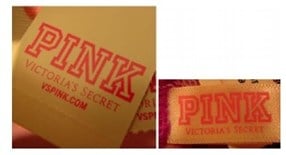 This article was written by Ian Wood.

IP in a Pod: Social Media

What IP issues surround the use and protection of hashtags, memes, GIFs and stickers?

Influencer Agreements: Six points that a business should consider

Due to the commercial power that influencers have over their followers, businesses are increasingly looking to secure their services.

MP’s to Investigate the ‘Economic Impact’ of Music Streaming

The DCMS announced that an inquiry is to be launched into the economics of the music streaming industry.

Q&A examining information notices and the right to manage

Can section 82 of the Commonhold and Leasehold Reform Act 2002 enable an RTM company to serve an information notice on a third party?