H&M v Yves Saint Laurent: CJEU decision points to a narrow interpretation of the scope of protection offered by a Community Registered Design after a nine year invalidity battle.

The high street retailer, Hennes and Mauritz (H&M), has lost its appeals to the EU General Court of the Court of Justice of the European Union (CJEU) against the decisions of the Office for Harmonisation in the Internal Market (OHIM) that two Community registrations for handbag designs filed by luxury brand Yves Saint Laurent SAS (YSL) are valid.

Such Community registrations are enforceable in all EU countries, giving an effective monopoly for the period of registration, which can be up to 25 years.

The Main Practical Points For Your Business

The Designs in Issue 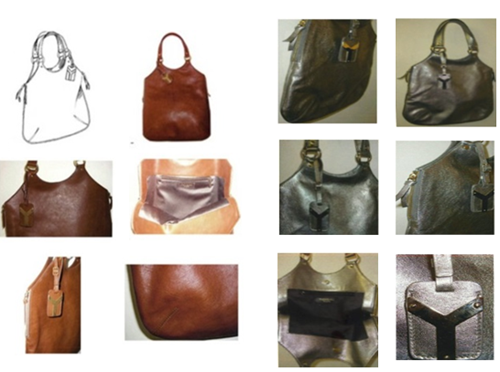 Judgement of the General Court of the CJEU

The General Court disagreed with H&M's interpretation of Article 6: namely, that the "freedom of the designer" test should be elevated in the analysis of whether the YSL Designs had individual character and therefore created an different overall impression on the informed user.

It rejected the contention by H&M that, in essence, OHIM had inverted the steps required when analysing "individual character", the General Court made it plain that such "a 'two-step test' [...] is not required either by the applicable legislation or the case-law."

Rather, the General Court stressed that the assessment of the "individual character" is the result of a four-stage examination; namely, deciding upon:

To understand how the CJEU reached its decision, it is helpful to have an appreciation of the arguments progressed by the parties and the decisions of the earlier courts.

H&M proceeded with applications to OHIM for a declaration of invalidity in respect of the YSL Designs (above) which were filed during 2006, claiming that they had no "individual character".

In support of its application, H&M relied upon its Earlier Design, which it claimed was created during 2005 and was first put on sale at the end of 2005 in its German stores. H&M contended that the YSL Design created the same overall impression on the informed user as the Earlier Design, with differences between the designs being minor in nature.

In particular, H&M pointed to the similarity of the overall shape of the YSL Designs to the Earlier Design and the use of metal rings and studs to attach the handles/straps to the body of the bag.

H&M argued that the informed user should be taken to mean everyone who usually buys such items, and not just limited to those purchasing in the luxury sector and/or to women alone.

It also argued that there were sufficient major differences, as well as several more minor differences, between the designs in issue which ought to lead to a finding that the YSL Designs created a different overall impression.

As to the standard to be applied, YSL said that the informed user in this case should be categorised as someone who usually uses such products, knows the trends and is interested in such products and is therefore more attentive than the average consumer albeit not an expert.

The Cancellation Division of OHIM found that the evidence regarding the creation of the Earlier Design and sale of the "Fantastic Shopper" was established. It then had to consider whether the YSL Design created a "different overall impression" on the "informed user".

The "informed user" was held to be a consumer who uses handbags regardless of gender, knows the relevant products and is aware of the existing features in this field without being an expert: the "luxury" element of YSL's products was irrelevant to the assessment of the overall impression produced by the YSL Designs on the notional informed user.

In assessing the validity of the designs in issue, the Cancellation Division found that the YSL Designs were novel as the differences observed were (in its view) more than insignificant and that they had individual character.

It noted that, whilst the freedom of the designer was very high in creating the YSL Designs, the unavoidable presence of certain elements (such as the handles/straps and a body to the bag) did not detract from the individual character of the YSL Designs.

In reaching this conclusion, the Cancellation Division concluded that the structure and lines of the YSL Designs were, overall, different to the Earlier Design which it considered to be more rectangular in shape and the addition of features such as the leather swing tag further added to the "distinctive character" of the YSL Designs.

H&M appealed the Cancellation Division's decision primarily on the basis that:

In rejecting its appeal, the Board of Appeal found that while the designs at issue did have common features there were, nonetheless, significant differences in shape, structure and surface finish.

As to shape, it found that the YSL Designs had a perceptibly rectangular shape compared to the more curved shape of the Earlier Design.

As to structure, it found that the YSL Designs gave the impression of a single piece of leather whereas the Earlier Design was divided into three sections.

As to surface finish, it noted that the YSL Designs were totally smooth apart from seaming whereas the Earlier Design was covered with pronounced and raised decorative motifs.

The Board of Appeal also made plain that even where the degree of freedom which a designer enjoyed in designing such an item was high, this did not cancel out these "significant differences" which were decisive in the overall impression created by the YSL Design when compared to the Earlier Design, stressing that:

It is unusual to see a high street retailer challenge the designs of a luxury retailer and certainly to the extent that this action has proceeded through three courts over nine years: there must have been a good commercial reason on both sides.

That said, in doing so, the CJEU has provided a helpful and practical recap of the process to be undertaken when assessing "individual character" for the purposes of determining whether a design is capable of being protected under the Community Design Regulations and when considering the merits of challenging another's design.

H&M have until late November 2015 to appeal the General Court's decision to the Court of Justice.

This article was written by Nicola Borthwick.

The Tricky Issue of Joint Authorship in Copyright Works

Where more than one person creates a work, it can be deemed ‘joint authorship’ and each has the same rights as a sole author would.

Our highlights over the past 6 months are now available.

Haliburton v Chubb: The final say on an arbitrator’s duty of disclosure

We consider some of the key points when appointed arbitrators do not agree on the appointment of the third arbitrator as chairman.

Understanding Rules of Origin under the Brexit Agreement

The UK-EU TCA came into effect on 31st December 2020, what does it mean for importers and exporters? and what does Rules of Origin mean?