Brexit and the end of freedom of movement risks pushing the social care sector past the ‘tipping point’, warns Charles Russell Speechlys

The scale of the challenges facing the adult social care sector is only set to increase with an end to freedom of movement following Brexit, research from law firm Charles Russell Speechlys suggests. The firm identifies three possible changes to the immigration framework to avoid the sector falling over the ‘tipping point’ as previously warned by the Care Quality Commission.

With more than 1 in 10 (15%) of the UK’s social care workforce non-UK citizens, and about half of those originating from EU member states, it is unsurprising that 84% of those surveyed feel an end to freedom of movement and an uncertain picture of immigration beyond Brexit will pose a possibly insurmountable challenge to the care sector.

The research conducted for Charles Russell Speechlys identified three in four (74%) would want freedom of movement to continue, while none said they wouldn’t. It indicated that the industry feels a ‘social care visa scheme’ could be a workable alternative to prevent a staffing shortfall that would likely be significantly detrimental to the sector.  The South of England was judged to be the most significantly exposed region.

However, the research also acknowledged that a perception shift would help address recruitment challenges in the domestic workforce. Classing care workers as ‘unskilled’ was regarded as sending out the wrong message, making the profession appear an unattractive career path.

In addition, it found that respondents noted the potential effectiveness of the Scottish Carers Living Wage as a means to incentivise workers into the sector, valued at £8.25 an hour – more than a pound higher than the National Living Wage. However, this would need to be funded by increased fees paid by local authorities to avoid further unacceptable pressure on margins.

The research was based on interviews with a representative sample of leaders in the adult social care sector, including three of the country’s largest care providers as well as smaller providers across the country.

Charles Russell Speechlys’ research found that the continuation of free movement of EU nationals was the preferred option for most providers interviewed as it would allow for a large pool of talent with no additional immigration compliance costs. The research identified four proposals to underpin a strategy for alleviating the pressure that would come from the end of freedom of movement.

“The crisis in social care is only set to get worse as government continues to fail to acknowledge the impact an end to freedom of movement poses to the social care sector.  The Prime Minister’s Lancaster House speech emphasised skilled workers but many sectors of the UK economy rely in part on “unskilled” workers from abroad.

“The Government seems willing to listen to the financial services, agricultural and food sectors who have been vocal about making arrangements for some so-called “unskilled” workers to be allowed to work in the UK.  Social care now needs to be seen as a priority alongside them.

“We have identified three available solutions that could be implemented quickly without a major overhaul of the current immigration system. Firstly, restoring care workers to the Tier 2 skills shortage occupation list would be an efficient and effective resolution, but could prove costly. Second, opening the Tier 3 system for the care sector could also prove effective, but would require the government to adopt a points-based structure, something it has said it will not do.

“The most effective method may be to adopt a sector-specific shortage occupation scheme for certain roles in social care, open to all nationalities who wish to come to the UK to work.”

Our Guildford team shortlisted at the Insider South East Dealmakers Awards 2021 for Corporate Law Firm of the Year.

Employment update 2021: the year ahead

We set out a timeline of the key changes expected for the year ahead in employment law, and how to best prepare for them.

The TCA is vastly limited compared to free movement and simply extends the business visitor category. 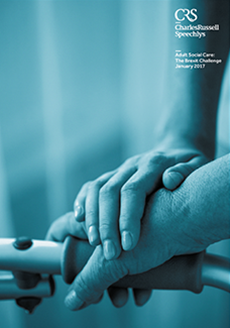