The value of Simone Biles – an update on athlete endorsements, the Olympics and Rule 40

With Simone Biles winning five more gold medals at the recent World Gymnastics Championships it appears that only injury can prevent her from being the star of Tokyo 2020.

However, her ability to benefit commercially from her talent and success may have been significantly enhanced by another development announced days earlier.

On 8 October 2019, the US Olympic and Paralympic Committee (USOPC) released updated guidance for its athletes regarding personal endorsements and marketing during the upcoming Tokyo 2020 games.

This follows wider changes to the rules surrounding athlete marketing and the Olympics. A summary of recent developments is set out below.

Until June this year, the International Olympic Committee (IOC) had imposed strict rules on the ability of participants in the Olympics to exploit individual personal endorsements. Rule 40 and bye law 3 of the Olympic Charter (which entrants must adhere to as a condition of participation) provided that except as permitted by the IOC, an Olympic athlete may not ‘allow his person, name, picture or sports performances to be used for advertising purposes during the Olympic Games’.

The purpose of Rule 40 is to uphold the ‘solidarity model’ of the Games, whereby official top-tier sponsors of the Games are protected and the revenue generated from such sponsors is reinvested by the IOC through national associations back into funding the sports, providing pathways and competitions for future generations of athletes and facilitating participation in the Games.

However, Rule 40 had long been controversial with athletes and was seen by many athlete organisations as unduly limiting the ability of athletes to personally capitalise on the exposure offered by the Games (with the rule applying for a four week period surrounding the Games). Further, contravention of Rule 40 could result in disqualification from the Olympics.

Many legal commentators had queried whether Rule 40 would be susceptible to legal challenge, particularly from the perspective of EU competition law as an alleged abuse of dominance contrary to Article 102 of the Treaty on the Functioning of the European Union.

By way of comparison, a complete blackout of personal endorsements during the Olympics goes far beyond the protection afforded under English law for actions such as ‘passing off’, which may be applicable where a sponsor seeks to imply a false association with the event in question.

The IOC had allowed a limited relaxation of Rule 40.3 prior to the 2016 Games in Rio de Janeiro, delegating to national Olympic committees the right to set guidelines for permitted endorsements. For Rio 2016, the guidelines of many countries required each endorsement campaign to be submitted and, in some circumstance, be granted express permission. Certain rules also required campaigns to be pre-existing and not ramped-up for the Games (a potentially significant requirement given some athletes are not sure of selection until close to the Games).

In February 2019, the German federal cartel office announced the results of its review into the German Olympic Sports Confederation’s application of Rule 40 and found the approach adopted ‘too far reaching’ and amounted to ‘abusive conduct’. However, the IOC noted that the Cartel Office had merely stated that the rules had gone too far, but crucially had upheld the legitimacy of imposing such rules.

Following the decision of the German Cartel Office, the IOC announced changes to the wording of Rule 40, which is now drafted permissively to recognise that athletes may allow their names and pictures to be used for advertising purposes during the Games in accordance with principles determined by the IOC. The IOC has issued ‘key principles’ for each national association to implement with their own guidelines.

A number of national associations have now issued guidance on the new Rule 40.3, including the Australian and US Olympic associations.

The USOPC guidelines (available here) contain a process whereby athletes must register personal endorsements and the relevant sponsors must then commit to abide by the principles of the guidelines. The USOPC has stated that sponsors which fail to adhere by the guidelines may be refused permissions for future Games, potentially impairing their ability to do endorsement deals with Olympians.

Significant relaxations have been made, including the right to run generic campaigns featuring athletes during the Games (which need not be continuations of existing campaigns) and the ability for athletes to thank sponsors and sponsors to thank athletes. The guidelines also contain helpful examples of messages that would and would not be permitted, such as the extract below¹: 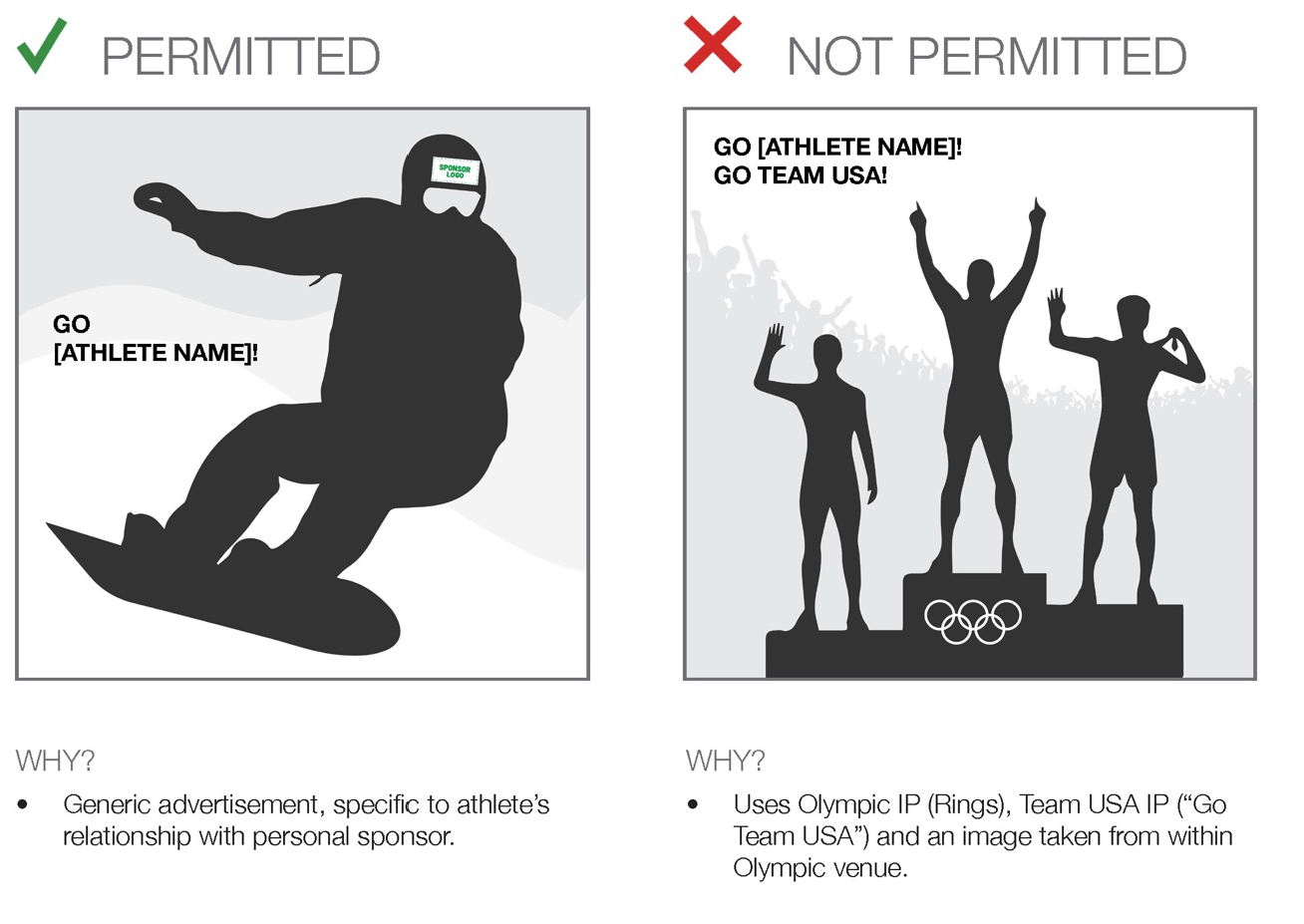 No doubt, Biles (or more likely her advisors) will be studying the guidance carefully.

The Australian Olympic Committee has announced similar relaxations, but with certain differences, such as a requirement not to escalate campaigns during the Games and a prohibition on sponsors congratulating athletes.

Many national associations have not yet published rules, but it is clear that there will remain differences between the rules for athletes from different nations.

It has been reported that the BOA is close to finalising its own updated guidelines following the changes to Rule 40.

Notably, British athlete Dina Asher-Smith, who is tipped to be a star of Tokyo 2020 and will doubtless command significant interest from sponsors, tweeted ‘Jealous!!!’ in response to the announcement of the USOPC guidelines.

In addition to the guidelines of the relevant national association to which an athlete is attached, global campaigns featuring Olympic athletes will be subject to additional rules, with a notification regime to be implemented by the IOC and notification of campaigns required by May 2020. For athletes with global appeal such as Biles, this could create a challenge to the execution of nimble online campaigns.

As the changes to Rule 40 take effect, athletes and sponsors will doubtless wish to exploit the new Rules and the prominence of promotional campaigns featuring current Olympians is likely to increase dramatically during Tokyo 2020

However, while any limitations on the commercial activity of athletes remain (such as notification and permission regimes), it is highly likely that athletes will maintain pressure to relax the rules further and the prospect of new legal challenges cannot be discounted.

Official sponsors of the Games will also be watching closely as to whether an increase in personal endorsements adversely impacts the exposure and value of the official rights.

Unusually in modern sport, the Olympics retains a clean venue policy, where not even top-tier sponsors have significant brand presence. As the IOC officials have recognised, this may change in event the value of official sponsorship is not protected as effectively by the changes to rule 40. Indeed, the IOC may need to reassess its commercial strategy in order to protect the ‘solidarity model’ and ensure that its investment in the future development and facilitation of sport across the world is not unduly compromised.

While the debate and legal manoeuvres will continue, one near certainty is that Simone Biles will feature prominently next summer.

This article was written by Richard Davies. For more information, please contact Richard on +44 (0)20 7427 6732 or at richard.davies@crsblaw.com.